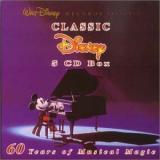 It is not a musical, it is a collection of the best selected songs that have been produced all by Disney – from Disneyland, cartoons, movies, musicals, live individual performances and other versions of creativity of this company. The first collection appeared in 1995, second in 1995 also, third in 1996, then in 1997 and the last came out in 1998. After a three-year period, as they were released, they have been gathered several times in collections, at first 3, then 4, and, finally, out of five disks. This happened in 2000, 2001 and 2003 respectively. The last of them was released on all continents except South America. In 2001 and 2002, the Disney company also produces a similar collection of 20 songs on each disk, while originally each disc contained 25 songs. All of the collections of 20 songs repeated ones out of 25, so it was not clear what their fundamental difference was.

Except of CD, compilations released on cassettes too, in the period of 1995–1998, but subsequent editions, of course, found the tape as the outdated thing. Each of the collections contain about 70 minutes of tunes, from 62:56 (4th compilation) to 73:03 (3 collection).
Last Update:April, 06th 2016