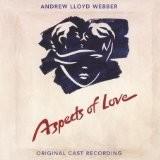 Act 1
It is told of how a fan of ascending stage actress Rose, Alex, met her, but she preferred his rich uncle to him, with which she eventually started dating (and later became his wife), because she loved uncle. Even after the uncle's words that he is now not very rich, as he was before, but simply wealthy, she still has not changed her decision to marry him.

At the wedding surrounding public were stunned by kissing her friend in the lips (according to some embodiments of this play, future husband of Rose, George, caught them once together in the same bed). After 13 years, Rose, and George's have daughter of 12 years, but that did not stop Rose to find her a young lover – because she is now a star of the scene.

Daughter of George, Jenny, falls in love with Alex, despite the great difference in age – he is now 32, and she's only 14. Alex insists that girl needs a good education in Paris. That evening, they dance, and it turns out they are both in love with each other despite the different worlds from which they originated. Jenny feels herself woman with Alex and kisses him hard and do the grown-style hugging.

After some time, Jenny turns 15 and she celebrates her birthday in the circus with his mother and Alex. In the evening, putting Jenny sleep, he again rejects her declarations of love and while he ponders aloud about his forbidden feelings (which he has), he overheard by her father, George, falling to the ground from a heart attack in a fit of rage. Alex discovers him down.

Some time later, Alex falls in love with Giulietta, ex-wife of George, than he breaks with Jenny and goes out of town, thinking about what will happen when Jenny grows up and becomes a beautiful lady.
Last Update:April, 06th 2016