All Shook Up Musical Lyrics 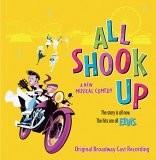 All Shook Up Lyrics

All Shook Up is a romantic musical story with a bit predictable, but no less vivid storyline. Singing performances are tied with the work of Elvis Presley, but the picture is not autobiographical. This is a story that describes the dream of a girl, performed by the unexpected visit of a stranger with a guitar. Ageless power of combination of romance and rock and roll is always valuable!

The musical was shown from May to June, 2004. Mostly Broadway actors took participation in it, except for the leading actor Chad (Manley Pope). Directed by Christopher Ashley, choreography entrusted to Jody Moccia. On the stage in Chicago, musical had been shown from December to January 2004-2005. As a result of this play, there appeared some changes in the vocal part of the protagonist, his voice became more deep and brightly expressed.

Stages of creation
Development of the project was going to continue. In 2005, in early March, the premiere of the musical was in the Palace Theatre. During the show, 213 performances were hosted.

Broadway
The success on Broadway was identified as more than 200 performances and more than 30 previews. The main roles were attended by Cheyenne Jackson, Jenn Gambatez, Jonathan Hadari.
In addition, musical was created in the theaters of regional scale and shown in schools and Universities.

"Love Me Tender" – 2015 UK Tour
Production gained new life after the restyling. The name was changed to "Love Me Tender" (one of the main Presley’s songs). In June 2015, the musical went on stage in a new production in Manchester. Characters were performed by Mica Paris, Shaun Williamson, Ben Lewis (in the main role), and others.

"German Premiere" – 2016
Premiere in Germany is scheduled for June 2016. It is expected that production will take place in the Music Östringen Stadthalle.
Release date: 2005
Last Update:December, 02nd 2015