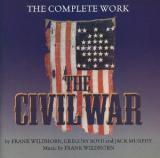 
Frederick Douglass
After a year of the most incompetent prosecution of any war effort in military history,
we have moved no closer to victory.
You, Mr. Lincoln, are fighting to restore a union, a union that we do not want.
It is diseased with prejudice and slavery.
And until you acknowledge this, the only ones who will be winning anything are the profiteers and theives!

Autolycus Fell
What's that smell I smell, Mabel?
Can you tell me what?

Greenback, in a stack
Blackjack, sneak attack
Get it any way that you can
Lie, cheat, sugar sweet
Elite, Easy-street
Suckers are like gold in the pan
Johnny Reb, Billy Yank
Black, White, break the bank
Everybody's part of the plan
If it's blue or gray or it's in between
Pick 'em clean
Till the only color's green

Autolycus Fell
Allow me to introduce myself:
Mr. Autolycus Fell at your "here at last" service, gentlemen.
Boys, you look to be a good, honest intelligent set of men,
full of ...., who would gladly share their last their last biscuit or nickle with any fair lady of real...

Why, you best take advantage of my offer before your whole crowd gets here.
How many of you boys is there hereabouts, anyway?

Autolycus Fell
Two divisions ain't too many for Mabel and Violet.
Now these ladies here is fresh from Madam Russell's bake oven in the great Tennessee city of Memphis.
Nashville.
They is free of all manner of veneral infection,
and have had but few opportunities for lewd associations.
So whichever of you is eager now for some horizontal refreshment,
can be assured of a good time generally I can tell you.
Boys...quality women like these don't go bad till later in life.
Greenback...makes the New York bankers go
Greenback...turns the cotton to wheat
Greenback...makes the Mississippi flow
Greenback...puts the shoes on your feet
One man's Yankee is a hooker girl's john
That she'll doodle-do 'til the money's gone
One man's rebel is a trader in gray
Either way, I'm the piper he's got to pay

Well, slam-bam thank you ma'am
Flimflam telegram
Get it any way that you can
Buy cheap, sell it steep
Clean sweep, pocket-deep
Suckers are like gold in the pan
Deathbed overhead
Hot lead in the red
Everybody's part of the plan
You can skin a cat if it's blue or gray
Hip-hooray
Greenback comin' either way

Captain Billy Pierce
How many?

Autolycus Fell
Two divisions. You're on their flank, and they don't know it.
Much obliged.

Confederate Soldier
Do you think he's telling the truth?