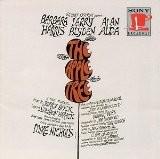 This musical is divided into three stories. The first tells in the cute shape about the first two people – Eve and Adam. In the form that is far from religion, it tells us the well-known story just like it is a love story with humor. At first, Adam believes that he is the only person in the whole world, and then he meets Eve. First, he is irritated by her, even offended, because she believes that she is above him, in intelligent way, mainly. But then he is imbued with love for her, and together they sing "Feelings", everyone about something own. Inviting her to his home, so she wouldn’t soak under the rain, Adam is angry that she starts redecoration on her own taste and she was upset because of his anger, running away from him to the pond, where she meets a Serpent. He convinces her to eat an apple that results in expulsion. However, it only get them two closer together and they soon give birth to babies, one of whom kills the other. And when Eve dies of old, Adam continues to take care of their garden, caused by the sentimental memory of her.

Story number two is with an unexpected ending. Beloved of Sanjar, troop commander of King Arik, the daughter of latter named Barbara, points to one of two doors, behind which sits a wild tiger or one of the woman slaves, Nadjira. If Sanjar chooses door of Nadjira, he will be forced to marry her, despite the fact that he loves Barbara – these are the rules of the Arena on which he is. If he chooses the door with the tiger, then he will die –tiger never spare anyone. And he was in the Arena due to punishment received from the king for having loved his daughter, but in virtue of his position, he was not worthy of her. His commandership didn’t help him in avoiding the punishment, despite winning many battles for the king. And the whole story is told by a balladeer, who is silent only in one thing – what door was chosen by Barbara.

The third story is about how important is to be yourself. Once there was a girl and her name was Ella. And somehow her fairy godmother comes to her and says that she will perform any desire. And she wanted to become famous and popular. And godmother did her a super girl named Passionella, but she could be like this for a limited time. Therefore, not wasting it, she has signed a lucrative contract in the show business, which has allowed her to become famous immediately. And she fell in love with her producer, and when the power of the spell ended eventually, she again became Ella, and a producer from Flip became a conventional fellow named George Brown. So they know the real embodiments of each other & they liked both, so they began to meet.
Last Update:April, 06th 2016