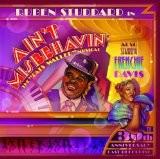 Such a writer of songs like Fats Waller, who was the Afro American, left a rich heritage and now, based on his singing, they have created and played a musical. Murray Horwitz wrote the book and Richard Maltby actively helped him in this. The music and lyrics were written by many composers and writers for this production – their names are too numerous to mention. Fats Waller had a song that gave its name to the whole musical – "Ain't Misbehavin’”, which means “Don’t misbehave”.

There is no story in a musical, as such. Everything in it are: different people perform different songs. Men and women. Neat and dressed in evening dresses and suits. And the songs – not combed and not tolerant, having lots of social incomprehensibility, and with such humor that requires visual support to make it funny. That is – the most primitive one. These songs are about the state of the soul in the style of funk, primitive jazz, folk and ethno. This behavior on stage is to show how beautiful you are pulling a suit on or gown named as dress, because your immense figure fits in nothing because you eat unhealthy food in very large quantities. It's about how to go on the stage and sing something without even any hint of development, but simply do the fool, throwing the leg over the other.
Last Update:April, 06th 2016