She Loves Me Musical Lyrics 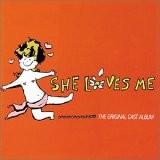 She Loves Me Lyrics

The script for this histrionics was written by J. Masteroff. Music was created by J. Bock, lyrics – by S. Harnick. This project is the 3rd theatrical variant of the theatrical of Hungarian playwright M. Laszlo. Before it, the beholders have had the opportunity to see a motion picture with J. Stewart in the lead role & spectacular ‘In the Good Old Summertime’, under the direction of J. Johnson. The essence of the plot evolves in Budapest’s perfumery shop with people working in it. The greatest attention is given to Georg – shop employee who is in a romantic correspondence with a mysterious woman codenamed ‘Dear Friend’.

Critics have commented favorably on the production, noting that it was made in too old-fashioned style & virtually was devoid of memorable & truly grandiose dance numbers. According to them, Eugene O'Neill Theatre’s scene was too small to provide the necessary scale. In 1964, the musical has received 5 nominations for the Tony Award. In one of them (Best Performance), it was able to win. In the same year, the record company MGM Records released an album, containing compositions played in the theatrical. In 1987, it was re-released on CD by Polydor label.
Release date: 1963
Last Update:July, 13th 2016