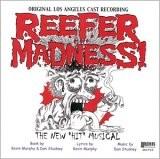 This staging, created in 1998, is a kind of musical satire on the propagandistic movie, which has been shot in 1936. K. Murphy and D. Studney wrote songs for this show. Andy Fickman became a director of the spectacle.

The premier took place at Hudson Theater in LA. Off-Broadway displays started in 2001 in New York. Soon after this, it was closed. But the play appeared to be quite popular, and there were productions, staged in the other cities by local theatrical bands. A version, created in 2008, managed to win Helen Hayes Awards for direction and outstanding Production.

This musical received international fame. There were performances in Canada, the UK and Australia. Canadian show was in 2006 and had a revival in 2011. British premier in London happened in 2009 at Bridewell Theatre. And the Australian staging was shown in 2008 Cleveland Street Theatre and revived in 2013 at Roundhouse Theatre. As for the original cast for LA production, it included H. S. Murphy, Ch. Campbell, J. Jenkins, L. Alan, R. Torti, J. Kassir, E. Matthews, S. Harris, M. Cunio, R. Strober and A. Cain. S. Sibley replaced J. Jenkins after several displays. The same happened to some other performers. There is also a movie adaptation of this story, which was created in 2005. Andy Fickman, Kevin Murphy and Dan Studney were the authors of the film.
Release date: 2000
Last Update:July, 12th 2016