Many Moons Ago lyrics - Once Upon A Mattress 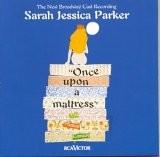 Many Moons Ago lyrics


Minstrel:
Many moons ago in a far-off place
Lived a handsome prince with a gloomy face
For he did not have a bride.
Oh, he sighed "Alas" And he pined, Alas,
But, alas, the prince couldn't find a lass
Who would suit his mother's pride.
For a princess is a delicate thing,
delicate and dainty as a dragonfly's wing.
You can recognize a lady by her elegant air
but a genuine princess is exceedingly rare.
On stormy night to the castle door
came the lass the prince had been waiting for:
"I'm a princess lost," quoth she.
But the queen was cool and remained aloof and she said,
"Perhaps, but we'll need proof;
I'll prepare a test and see."
"I will test her thus,"
the old queen said,
"I'll put twenty downy mattresses upon her bed,
And beneath those twenty mattresses I'll place one tiny pea.
If that pea disturbs her slumber
Then a true princess is she!"
Now, the bed was soft, and extremely tall
But the dainty lass didn't sleep at all,
and she told them so next day.
Said the queen, "My dear, if you felt that pea
then we've proof enough of your royalty.
Let the wedding music play!"
and the people shouted quietly

Minstrel:
For a princess is a delicate thing, delicate and dainty as a dragonfly's wing.
You can recognize a lady by her elegant air, but a genuine princess is exceedingly rare!
There are many versions of this story.
I sing them all.
This is the prettiest, but it's not quite accurate.
I happen to know the true story of "The Princess and the Pea"
for the very good reason that I was there.
It was a small kingdom, ruled over by a talkative Queen and a mute King.
And the princess in the true story was not the only girl put to the test.
Actually, she was one of 13 girls? girls who came to the castle hoping
to wed the Prince, but who, for one reason or another, were found to be unsuitable. Last Update: June, 26th 2013

Musicals > O > Once Upon A Mattress > Many Moons Ago
Song video
Popular musicals | MORE ►
Musical: Once Upon A Mattress. Song: Many Moons Ago. Broadway musical soundtrack lyrics. Song lyrics from theatre show/film are property & copyright of their owners, provided for educational purposes
© 2021 AllMusicals.com
Add / Correct info   ·   Contact us   ·   Site privacy   ·   DMCA