Closer Than Ever review 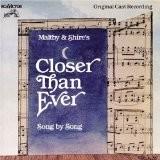 Closer Than Ever review

Closer Than Ever Review - Broadway musical

It is good, what in musical star those who have already gone through a lot of events in their life. For example, would you believe the actor of 25 years has been going through a second marriage & a midlife crisis? So the same we would not have believed this. Therefore, looks quite attractive reasonable decision of Richard Maltby, Junior, the main creator of this musical, to hire experienced actors who are over 40, so that they appear in the event. This histrionics shows following eternal truths: unrequited love, marriage, divorce, adulthood, intercourse. All of the topics that will always be chafing the minds of Humankind, no matter what century is now, or what level of computerization of your environment is. Because you will always go through these stages in your life – there's no avoiding it.

What's great about this particular performance – a powerful party of each of the actors. There are only four of them, so that they can use any size of the stage, even a super-compact. Further, each of them has very mature voice, strong and bright as, for example, Jenn Collela. Very powerful soprano of Christiane Noll makes one think about standing applauding to her. Strong songs in a musical without the libretto – interesting creative option – make it possible to appreciate the musicality of the show, not diluted with boring things like conversations.

There is no such thing as plot & it is somewhat negative. Despite 300+ productions of this histrionics, there could be greater amount if there was at least some hint on history, through which the viewer could consistently move from song to song. Typically, musicals without a plot not cause bright sympathies, because they are in such case become a simple set of scenes, which emerges at the audience as flashes from the past or reflections about the present/future. For true connoisseurs of pure singing musicals, this is clearly delight for auditory nerves. But for those who came to see the plot – and these are often the majority – there will be nothing.

Each song has its own character, from bright expressive to a very depressive, with the mood may changing diametrically literally within 10 minutes. Different in appearance and character, actors do not cause bright adoration by their outer look & some may even find them repulsive. But what musicality they create & what light image from the show remains to the audience – this bribes a lot.
Last Update:April, 06th 2016