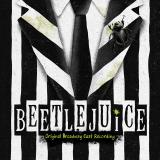 A stage transfer for the spirited 80s comedy struggles to produce any memorable songs but provides an enjoyably silly night out nonetheless.

A specter is haunting the Winter Garden. Actually, a lot of specters. There are dead football players, a slit-wrist beauty queen, a sandworm, a singing roast pig, a couple of garden-variety friendly ghosts and of course Beetlejuice himself, the zoot-suited, fright-wigged, sour milk-complected ghoul at the whirling center of Beetlejuice, a demented, borderline incoherent, often rousing new musical. The specter of capitalism? That’s there, too. The merch booth is going gangbusters.

Tootsie review – Broadway adaptation is a giddy night out
Read more
As a movie to adapt into a big-bucks Broadway musical, Tim Burton’s Beetlejuice, which made a bundle for Warner Brothers in 1988, is a weird choice, not because it isn’t clever or beloved or stylistically distinctive, but because it depends – a lot more than say, Pretty Woman – on special effects. Even in the comparatively low-tech world of the late 80s, the movie had plenty of jaw-plungers and retina-dazzlers.

It also depended on a riotous, uncategorizable, absolutely lunatic performance by Michael Keaton as Beetlejuice, a darkside scumbro with plasticine limbs and bad intentions. Alex Brightman, who stars as Beetlejuice, last bestrode the Winter Garden stage in the Andrew Lloyd Webber and Julian Fellowes’ adaptation of School of Rock. He gave a high-wattage performance that never really banished the memory of Jack Black, who had starred in the film. So convincing the kiddies to love a show about death, or as one Beetlejuice song puts it, “the whole ‘being dead’ thing”, was the least of Beetlejuice’s challenges.

But happily and improbably Beetlejuice, directed by Alex Timbers, lays those problems to rest. (A pretty hectic rest, but still.) Where the show falters is in the more ordinary stuff of musical theater, story and song. But when the conductor rises from the orchestra pit with a shrunken head above the shoulders of his natty suit, you can forgive a lot.

The musical’s plot mostly tracks with the movie’s: the Maitlands, Barbara (Kerry Butler) and Adam (Rob McClure), are a normcore couple, mousily inhabiting their country-fried home. When they die in a freak accident, a developer, Charles (Adam Dannheisser), moves in with his girlfriend, Delia (Leslie Kritzer), and daughter, Lydia (Sophia Anne Caruso), a death-obsessed teen. Beetlejuice encourages the Maitlands to haunt the house, because he digs chaos and because he has some never remotely intelligible plan to be made human.

The book writers, Scott Brown and Anthony King, have plenty of good lines (“I’m invisible,” Beetlejuice says, “powerless. Like a gay Republican”) but they haven’t really decided what story they want to tell. Yes, Lydia gets an arc. But so do the Maitlands. So does Beetlejuice. So do Charles and Delia. (It’s like an Oprah giveaway: You get an arc! You get an arc!) It’s never remotely clear whose story is central and where our sympathies should land.

Eddie Perfect’s songs are forgettable. Literally. I saw the show a few days ago and the only tune I can even vaguely recall is Creepy Old Guy, a jokey paean to dirty old men, which stuck in the cerebellum mostly because it was so obviously big-time wrong. (It knows it is wrong, but it is still so wrong.)

And yet somehow, impossibly, Beetlejuice is pretty fun. There’s superb haunted house set design by David Korins, nifty special effects from Jeremy Chernick and magic and illusion design from Michael Weber, to say nothing of the spectral lights, the ghoulish costumes, the bananas hair and wig and makeup design and the puppetry. My God, the puppetry. A Tony for the sandworm! As for the humans, maybe Brightman works a little too hard and never quite eclipses Keaton, but he makes the role his own and he has a fine time doing it. As Delia, Kritzer nails every dippy, daffy, wacky line, its own kind of special effect.

Beetlejuice is probably everything that’s wrong with Broadway: the privileging of style over substance, the nonsensical structure, the songs that seem to fall right out of your ears. But why not sit forward, tense up and just enjoy the undead fireworks. And the sandworm.

… we have a small favour to ask. Millions are turning to the Guardian for open, independent, quality news every day, and readers in 180 countries around the world now support us financially.

We believe everyone deserves access to information that’s grounded in science and truth, and analysis rooted in authority and integrity. That’s why we made a different choice: to keep our reporting open for all readers, regardless of where they live or what they can afford to pay. This means more people can be better informed, united, and inspired to take meaningful action.

In these perilous times, a truth-seeking global news organisation like the Guardian is essential. We have no shareholders or billionaire owner, meaning our journalism is free from commercial and political influence – this makes us different. When it’s never been more important, our independence allows us to fearlessly investigate, challenge and expose those in power.
Last Update:July, 18th 2022