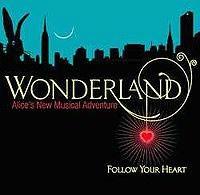 After Tampa production, the reviews were mixed. The critics noticed plenty of positive moments, such as dances, costumes, popular songs, but there was still one important disadvantage – the musical had no sense. Some of them even claimed that the show should be rewritten in a proper way. Particular scenes and characters appeared to be preposterous, such as meeting with Carroll and the Hatter. As the critics think, the creators have tried to add more depth to the story, but they failed.

Broadways production also had quite negative reviews. But one of the New York Times critics called it energetic, inspirational and full of humor. That’s why we cannot say that this production has been absolutely unsuccessful.

The viewers also liked the spectacle, and this is the most important thing. The ticket sales were strong, and another international tour is planned, so we can expect some more positive reception both from the critics and the audience.

Looking at the positive moments of the staging, we should mention the projection design, which has been made by Sven Ortel. He managed to create a real image of a Wonderland. Together with Paul Gallo’s lighting and Neil Patel’s sets, the decorations look just magnificent. The spectators might seem to be in a real fairy-tale.

We cannot forget about the outstanding compositions, created by Frank Wildhorn and Jack Murphy. Wildhorn is a great composer, who has been creating melodies for musicals and popular songs for many years. He was also the author of internationally popular W. Houston song. He is well known for his works for Jekyll and Hyde show as well. No doubt that the music for this production appeared to be the same marvelous and memorable.

Gregory Boyd, who was not only the director, but also a co-author of the musical, did a great job. He mixed all this brightness and craziness into a single whole. The actors are perfectly selected. The characters are fantastically colorful and the performers were able to transfer their mood, emotions and inner state. The role of the Hatter is both evil and delicious. Kate Shindle is just a perfect choice for this character. The songs, performed by her, prove that. As for her visual look, the critics called he? a glowering vamp. Darrin Ritchie reflects the image of a Disney prince, who saves everyone and sacrifices himself. Telling about Janet Dacal, her image reflects the place she has come from. While the costumes of all the other characters are so-called extraordinary and exotic, she looks quite usual. She stands out of the general madness of this world. Her acting is the same, she shows that she is from the other place and we cannot understand what she is doing here.

Concerning choreography, the musical is successful. It was even nominated for Astaire Award in this category. So, Marguerite Derricks created a nice thing. There is probably no need to search for a deep sense in this performance. There are lots of other to admire here. If you want to see something bright and outstanding, this staging is what you require.
Last Update:August, 02nd 2016