Tale of Two Cities, A review 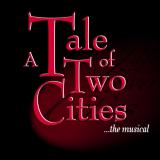 Tale of Two Cities, A review

The musical is an adaptation of the novel by Charles Dickens, written in 1859. The book is part of a number of works obligatory for studying in American schools. There were made other attempts to adapt the novel, but no version has become yet successful. J. Santoriello was impressed by this book as a teenager. Being a self-taught musician, the author wrote the songs, without thinking that later she would have to become a librettist in this production. The histrionics was a finalist of Eugene O'Neill Center Musical Theatre Workshop. The first songs were presented in a concert held in Indianapolis, with a symphony orchestra and a large choir. The show has received grants from the states of New Jersey and Florida, becoming a finalist in the future Los Angeles International Musical Theater Competition.

Creation of production was not easy. Director D. H. Bell left the project due to personal problems before the pre-Broadway try-outs begin. In 2006, he was replaced by M. D. Edwards. Based on the work of his predecessor, W. Carlyle made Broadway production come to life. After three days from the premiere on Broadway, a collapse on stock markets began in the world. What was happening, made a hard hit on various shows, but the musical of J. Santoriello was able to stay afloat – tickets sell almost didn’t fall. Still, the show had to be finished a week earlier than planned.

Many critics have noted that the performance didn’t have enough dramatic tension and emotions. Reducing the number of characters of the second plan, who were responsible for realism in Dickens’ novel, also affected the weakening of the total incandescence of production. Many actors have entered in this show from the musical ‘Les Mis’, so their performance often reminded the previously mentioned play to the critics. Only James Barbour managed to reveal his character in the best way. The deep baritone of singer and his passion ideally suited the embodiment of a lawyer, who sacrificed his life for the sake of happiness of his beloved person. A Broadway newcomer Brandi Burkhardt also brilliantly proved herself. Image of Lucie Manette in her performance has left the audience very impressed.

The musical has received three nominations for Drama Desk award, two Outer Critics Circle and one at Drama League. Production gained 10 victories in 12 categories in general for the Sarasota Magazine Theatre Award. The performance received 2 awards from the Florida's Curtain Call. Musical was nominated for Broadway World Fan-Choice in 7 categories. Despite its light shortcomings, the show had a success with the audience. It survived for two Japanese productions, three Korean, and one of every of those: Irish, Welsh, Scottish, English, German, as well as a big number of American productions. Classical work submitted via songs continues in different theaters of the world at the moment of writing these lines down.
Last Update:July, 18th 2016