Who Is Crazy/My Psychopharmacologist and I lyrics - Next to Normal 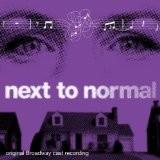 Who Is Crazy/My Psychopharmacologist and I lyrics

Who Is Crazy/My Psychopharmacologist and I


DAN
Who's crazy, the husband or wife?
Who's crazy to live their whole life
Believing that somehow things aren't as bizarre as they are?

And I was a wild twenty-five,
And I loved a wife so alive.
But now I believe I would settle for one who can drive.

DIANA
My psychopharmacologist and I.
It's like an odd romance:
Intense and very intimate, we do our dance.

My psychopharmacologist and I.
Call it a lover's game.
He knows my deepest secrets.
I know his... name!

And though he'll never hold me
He'll always take my calls.
It's truly like he told me
Without a little lift, the ballerina falls.

DIANA
I've got less anxiety but I have headaches, blurry vision, and I can't feel my toes.

DIANA
Not a very exact science, is it?

CAST
Zoloft and Paxil and Buspar and Xanax, Depakote, Klonopin, Ambien, Prozac,
Ativan calms me when I see the bills.
These are a few of my favorite pills.

DIANA
Ooh, Thank you, doctor, Valium is my favorite color. How'd you know?

DIANA
I'm nauseous and I'm constipated, completely lost my appetite and gained six pounds, which, you know, is just not fair.

CAST
May cause the following side effects, one or more:
Dizziness, drowsiness, sexual dysfunction,

DIANA
I now can't feel my fingers or my toes. I sweat profusely for no reason.
Fortunately, I have absolutely no desire for sex.
Although, whether that's the medicine or the marriage is anybody's guess.

DR. MADDEN
I'm sure it's the medicine.

DIANA
Oh, thank you, that's very sweet, but my husband's waiting in the car.

DAN
Who's crazy, the one who's half gone?
Or maybe, the one who holds on?
Remembering when she was twenty, and brilliant and bold.
And I was so young, and so dumb.
And now I am old.


DAN
They say love is blind...
But believe me, love is insane.

Musicals > N > Next to Normal > Who Is Crazy/My Psychopharmacologist and I
Song video
Popular musicals | MORE ►
Musical: Next to Normal. Song: Who Is Crazy/My Psychopharmacologist and I. Broadway musical soundtrack lyrics. Song lyrics from theatre show/film are property & copyright of their owners, provided for educational purposes
© 2021 AllMusicals.com
Add / Correct info   ·   Contact us   ·   Site privacy   ·   DMCA