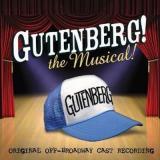 Two silly-looking guys in shirts, ties and ridiculous headdresses play the fools on a stage, interacting with different improvised subjects and telling the story unscrewed to a limit about the great German first printer under the laughter and an applause of public ready to eat any apple thrown in it, even if also the worm-eaten.

Many modern performances are based on absurdity and pseudo-originality. Concerning the Broadway – it is a quite wide layer of the satirical play where musicals as much as possible depart from standards of the initial genre. However, let's face the truth, this new Chicago version is rather a representation of two clowns, than the work applying for any gravity. Certainly, there is nothing bad in easy absurdity, forcing the viewer to laugh to tears. Nevertheless, the main mistake is that the duet occupying a scene revels by the humor that kills all idea on a root.

The plot also causes contradictory emotions. Worshipping to a Satan monk, the inventor, famous for the whole world with the silly assistant in love with him – all this looks bad the thought-over pun. The Bliss and Goodrich duet already terribly changes right at the beginning. Where it is necessary to be funny, they seem silly, and their charisma isn't enough to rescue a situation. Feeling that this couple plays in school representation, and even in general addresses audience of kindergarten.

One more problem is that theatrical doesn't show absolutely anything new. Golden rule of the comic environment: do better than those who did it before you, is absolutely broken here. It concerns also performance of songs; it is more reminding a stamped aping and a mangling of initial versions of songs that we observed hundreds of times and in much better execution before. Moreover, actors revel in themselves, too much attention is paid on them, but not to a musical component that generally should be the main thing in performances of this sort. It seems, clean the hall, which isn't really filled with the audience, and they will continue to wriggle, laughing at each other's jokes.

It's hard to say that viewing of the musical was absolutely failure. After all, initial work of Scott Brown and Anthony King in itself is quite witty; parts of the play are stuck well together and perfectly contrast among each other. In principle, if you are the admirer of clichéd scenes of this genre, you would even laugh and do it loudly. Closer to the final, songs sound more harmoniously and you involuntarily get used to the action happening on a scene. A question is, whether you will be also impressed after an exit from the hall, not to mention an interval like one day after a while. The answer, we suspect, is negative.
Last Update:April, 06th 2016