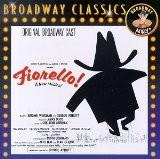 Gentlemen, here we are, and one thing is clear
We gotta pick a candidate for Congress this year

Gentlemen, how about some names we can use
Some qualified Republican who's willing to lose
How's about we should make Jack Riley the guy ?
Which Riley are you thinkin' of - Jack P. or Jack Y?

Gentlemen, knock it off, and let's get this done
Try Michael Payeshenckovich -- I'm certain he'd run
Mike is out -- I'm afraid he just wouldn't sell
Nobody likes a candidate whose name they can't spell

How about Frank Monahan?
What about George Gale?
Frank ain't a citizen and George is in jail

We could run Al Wollenstein
He's only twenty-three
What about Ed Peterson?
You idiot, that's me!