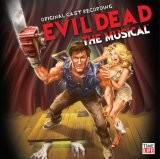 This musical of Canadian origin has the award – Dora Audience Choice Award, which it received in 2008. This is pretty popular non-classical play about zombies and other evil spirits, which crumbles on stuffing by a man with cropped hand, with fastened chainsaw to it. He did it with a hand himself. It is unlikely that such a musical people would like to see on Broadway, but it is entertaining, funny, and pretty tense – much better than half of Broadway shows.

Ontario took the first staging of this musical, in the framework of the local comedy club, if struggle with evil spirits might seem a comedy for someone. But, yes, with this background were filmed a lot of comedies, but the drama remains nevertheless a staunch ally of the genre, and of this particular play also. In 2003, full-fledged professional adaptation came out, coordinated with key producers – director of all movies of the franchise, Sam Raimi and the main actor, Bruce Campbell, depicting Ash. Sam Raimi – is a very big-name producer, director, actor, and writer. He did, in addition to these films, series about Hercules and Xena, their spin-offs and lots of continuations, and in general he worked on a huge variety of movies and TV series, where it is required to show the monsters and to do unusual make-up and to work-out storylines associated with non-existent animals or with the underworld.

Musical has not visited Broadway or the West End – not the format that can be perceived by their public. But it has well settled down in Las Vegas – the entertainment center of the world, which, after Dubai, is the jewel in many ways, also built in the desolate desert. It is like a magnet, attracts travelers from everywhere, so they left their money in many locations of entertainment of the city (and not only in casinos). And this musical, Evil Dead, starting from 2011, is the highlight of one of its cozy and sassy places, with an open date of ending and goes so far as, according to one of its producers, "last fan will be covered with the blood on its 4D viewing".

There is nothing unusual in the fact that musical is done on otherworldly topic. For example, the same Dracula or The Phantom of the Opera. But when they produce zombie-slasher, with rivers of blood and severed limbs (artificially, but still), with black humor and grim but attractive energy, albeit not as wild as in the movie "A Cabin In The Woods", but occurring in the same structure – it is far away from Broadway. But it is a "bull's-eye" when such a hellish inferno performed on the stages of Las Vegas. Viva Las Vegas! Viva el morte!
Last Update:April, 06th 2016