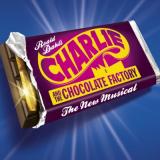 
OOMPA DJ:
And here she is, new in the number 1, chewing up the charts!
she's big and getting bigger,
she's blue and getting bluer,
She's a fruit-based sensation, and she goes by the name of Juicy!

OOMPA-LOOMPAS:
Everybody wants a piece of the action, everybody's talking 'bout Juicy!

Juicy is a girl named Violet B.
She doesn't have a talent as far as we can see,
She wants to be a star though there's nothing she can do,
She's gonna be famous now for just turning blue!
(Squeeze that mother out!)

She's always wanted fame, now she's 'bout to explode,
We'll scoop up every chunk and we'll serve her a la mode!
She's gonna hit the big time when the big gum drops,
She'll finally burst her bubble at the top of the pops!

MR. BEAUREGARDE:
Hey, I got an idea! Hello? Fruit Monthly?

OOMPA-LOOMPAS:
Her lips say nothing and her hands do less,
Her clothes are yours cause soon she'll need a tent for a dress!
Her stomach will be perfect when it's squeezed and its oozed,
Her brain's in mint condition cause it's never been used!
Her legs are good and sturdy cause she ran towards the spotlight!
You better take em both, to split them up would be not right.
And you had better hurry if you wanna grab an ear,
Cause in fifteen minutes she is bound to disappear!