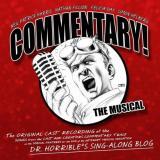 Joss Whedon has realized this project in the interval between his activities, before working on high-profile Marvel and after his last well-known TV series Buffy... and Angel, which is itself a spin-off from Buffy... He invested own money in this musical (USD 0.2 million) to begin the production, because his knows how often projects were frozen in his life, unable to find sponsorship and support of the scripters. Here he acted as director, producer, screenwriter and cast manager. Through his connections and good relationships with many small producers and studios, where he had previously filmed, he had free hands in the work, and might choose the length of the plot. It was originally planned that the implementation will be of 30 minutes, but then it came out as a 42-minute version in the form of webisodes, which are now quite popular format. They gained popularity in a few years thanks to The Walking Dead, the most successful TV series about a zombie apocalypse for all times, who practices its releases of teaser parts as webisodes, telling different spin-off stories.

Creative person Stephen Sondheim also inspired the creation of several songs from this musical. DVD release included a three-minute video explaining why the main character seeks to become a member of the Evil League of Evil, and what the benefits of such entry are.

The book, which contains a script, the libretto and some private addition of actors, including Whedon, Harris and Helberg, was released a year later. Atlanta, Georgia took a stage of musical, a version of webisode-musical that has been formatted for standing room. This version later became very popular for amateur productions in different colleges.
Release date: 2009
Last Update:January, 19th 2016