We Will Rock You synopsis 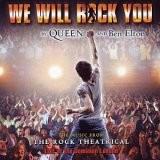 We Will Rock You synopsis

We Will Rock You Synopsis - Broadway musical

After 300 years, the Earth has become an ‘iPlanet’, where the execution of live music was prohibited & there was no rock genre. GaGa-generation listens to the same type of compositions, watches the same movies & has a standard way of thinking. But there are those who have not become a pop-mass. Galileo was the black sheep of his graduating class, as in his head sounded music & poetry, not similar to the standards of ‘iPlanet’. Soon, the young man was arrested & taken to the police chief Khashoggi. There also was brought Goth-girl who stood out against the background of her peers. Killer Queen was at the head of the corporation, managed the planet’s life. She learned about the prophecy about the bright star that would find musical instruments in a place where there still a live rock existed. Killer Queen ordered Khashoggi to find someone who can destroy ‘iPlanet’ system.

Galileo & Goth girl woke up in the hospital. Realizing that they are soul mates, young people ran away from the facility. Killer Queen ordered to blow up all the mountains on Earth, as she did not manage to find a place mentioned in the prophecy. Brit & Meat emerged from the sewers, where they were looking for material for the manufacture of musical instruments. The bohemians were confident that soon appear a Dreamer from the prophecy, who will change the world. Hearing steps, they hid. Galileo & Goth girl were seeking for refuge. The young man decided to give the name ‘Scaramouche’ to a friend – it often sounded in his head. Brit & Meat appeared before them, accusing them of espionage. Galileo rejected such suspicions. He said that the word came to him one night in a dream. Brit started to sing a rock song & the young man was able to complete it easily. It turned out that the young man was a Dreamer from prophecy.

Galileo & Scaramouche were brought to the big hotel, which was the center of Bohemia. Suddenly the police headed by Khashoggi burst there. During the escape, covering Galileo & Scaramouche, Brit was killed. Soon, the young people found that they have tracking devices implanted. After removing them, the couple realized – they were the only representatives of the bohemians, remain at freedom. Galileo & Scaramouche fell in love. Not learning anything new about the prophecy, Khashoggi ordered to destroy the oppositionist’s minds. Galileo told Scaramouche about his dream, in which the musicians went to the Seven Seas of Rhye. They quarreled because the boy did not want to take the girl with him out of the possible danger. Deciding that their relationship since then is just business, young people hit the road.

During the celebration of the victory over bohemia, Khashoggi reported Killer Queen on the Galileo’s & Scaramouche’s escape. For this failure, she ordered to erase his mind. In the pub ‘Seven Seas of Rhye’ Scaramouche found that the Queen’s band musicians predicted the onset of this time. Pop, who was working in the library, helped the couple to understand the meaning of the prophecy. Statue of Freddie Mercury, located at Wembley Stadium was the place near which were supposed to be musical instruments hidden. But, having gone there, Scaramouche & Galileo could not find anything. They restored their relationship. The girl asked the boy to sing a song that sounded in his head. Thanks to this, the electric guitar appeared on the surface. It turned out that only Scaramouche can play it. While the couple sang rock music, Pop hacked into information networks & showed their performance to the entire world. With that, they defeated Killer Queen & her corporation.
Last Update:July, 21st 2016