Stars And The Moon lyrics - Songs For A New World 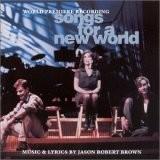 Stars And The Moon lyrics

Stars And The Moon


I met a man without a dollar to his name
Who had no traits of any value but his smile
I met a man who had no yearn or claim to fame
Who was content to let life pass him for a while
And I was sure that all I ever wanted
Was a life like the movie stars led
And he kissed me right here, and he said,

"I'll give you stars and the moon and a soul to guide you
And a promise I'll never go
I'll give you hope to bring out all the life inside you
And the strength that will help you grow.
I'll give you truth and a future that's twenty times better
Than any Hollywood plot."
And I thought, "You know, I'd rather have a yacht."

I met a man who lived his life out on the road
Who left a wife and kids in Portland on a whim
I met a man whose fire and passion always showed
Who asked if I could spare a week to ride with him
But I was sure that all I ever wanted
Was a life that was scripted and planned
And he said, "But you don't understand ?

"I'll give you stars and the moon and the open highway
And a river beneath your feet
I'll give you day full of dreams if you travel my way
And a summer you can't repeat.
I'll give you nights full of passion and days of adventure,
No strings, just warm summer rain."
And I thought, "You know, I'd rather have champagne."

I met a man who had a fortune in the bank
Who had retired at age thirty, set for life.
I met a man and didn't know which stars to thank,
And then he asked one day if I would be his wife.
And I looked up, and all I could think of
Was the life I had dreamt I would live
And I said to him, "What will you give?"

"I'll give you cars and a townhouse in Turtle Bay
And a fur and a diamond ring
And we'll be married in Spain on my yacht today
And we'll honeymoon in Beijing.
And you'll meet stars at the parties I throw at my villas
In Nice and Paris in June."

And I thought, "Okay."
And I took a breath
And I got my yacht
And the years went by
And it never changed
And it never grew
And I never dreamed
And I woke one day
And I looked around
And I thought, "My God...
I'll never have the moon." Last Update: February, 18th 2014