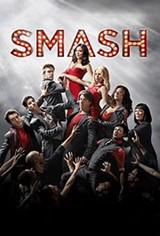 The script of the series was created based on Garson Kanin’s ‘Smash’ novel. The idea of this project came to Steven Spielberg in 2009. This plan was supported by R. Greenblatt – at that time, the president of Showtime entertainment. Spielberg decided that if he would succeed to create a worthy production in the series, it would also take place at Broadway. Each season meant the development of a new musical. When in 2011 Robert Greenblatt was elected president of NBC Entertainment, he decided to implement the idea of Steven Spielberg. For the production of the pilot series were spent 7.5 million dollars. T. Rebeck worked on the storyline of the first season. It subsequently has been withdrawn from the project.

NBC channel has signed a contract with Columbia Records to create an album with recordings from the first season. It was released in May 2012. In the first week, buyers purchased 40,000 copies. Album with musical numbers from the second season was released in February 2013. It included 22 songs from ‘Bombshell’, as well as additional pieces. 16,000 copies were sold in its first week. Video of both seasons was released on DVD. The series received an award from the Critics' Choice Television Award. Also, the first season was nominated for four Primetime Emmies, winning in 1 category. On the same award was twice nominated a second season of the series. Project 2 times was nominated for Teen Choice Award and 1 time – for Television Critics Association Aw. The series won 2 out of 3 nominations for the Women's Image Network. Staging has been presented in American Cinema Editors Award, Golden Globe and Grammy. The project was nominated for four Dorian Awards and has received one from the GLAAD Media Awards, CDG and MPSE Golden Reel, one from each. It also was nominated by the Society of Operating Cameramen.

The creators of the series have carried out both the theatrical production of musicals, which involved television heroes. In December 2013 took place 2 performances of ‘Hit List’. Due to one-off show in June 2015 at the Broadway, ‘Bombshell’ managed to collect 800,000 dollars to fund of the actors. Later, based on this musical about the life of Marilyn Monroe, it is planned to create a full-fledged production. Critics were very favorable when telling of pilot series. They appreciated the originality of the story and musical numbers. Also, reviewers have noted excellent vocal abilities of actors. Subsequent series have not caused such enthusiastic reaction. The second season was weaker than the first part, which affected the interest of the audience. The series has been broadcasted in 31 countries.
Last Update:July, 13th 2016