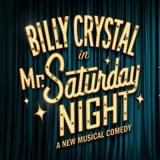 I admit it. I saw Jackie Mason in his “Much Ado About Everything.” The lead theater critic lied and said he was sick, so I was given the assignment to review the 2000 one-man show on Broadway. I can write this with confidence because Mason is no longer with us, but I’d sit through “Jackie Mason: Much Ado About Everything” before doing the same with “Mr. Saturday Night,” which opened Wednesday at the Nederlander Theatre.

In this new musical, Billy Crystal plays Buddy Young Jr., a caustic Mason-like stand-up comic who makes a habit of alienating people. Only his long-suffering wife (Randy Graff) doesn’t desert him. Even his long-suffering manager-brother (David Paymer) has retired to Florida. The musical is based on the 1992 movie of the same name, with Crystal, Lowell Ganz and Babaloo Mandel on board to fashion their screenplay into a book.

On stage, Crystal entertains like a real pro when delivering the character’s nasty stand-up routine, which comprises much of the first act. He wears the funny bad-guy mask with more ease and greater comic effect than he did playing his nice-guy self in the autobiographical “700 Nights” on Broadway in the 2004-05 season. But things get off to a bad start in the first act as soon as other characters begin to sing, with a score by composer Jason Robert Brown and lyricist Amanda Green.

beginning with Young’s adult daughter (Shoshana Bean), who can’t keep a job or find a man or stop complaining about her father or make us care about her. Her dirge of a song “There’s a Chance” early in the first act stops the show cold for all the wrong reasons.

Brown has the excuse that he’s been given the task of writing music for people who can’t sing, Bean being the one exception. Green, on the other hand, never comes close to writing lyrics that reflect Young’s edgy humor even when that character is singing.

At its heart, the musical “Mr. Saturday Night” is as sentimental as it is dishonest. Under the direction of John Rando, the show entertains only when the title character is being nasty. Reform him, as all his dull relatives insist upon, and he ceases to hold any interest.

“Jason Mason: Much Ado About Everything” was more entertaining. One, it was shorter. And two, Mason didn’t sing much.
Last Update:July, 18th 2022