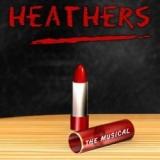 1989, fictional city of Sherwood. Seventeen-years-old Veronica Sawyer is for the first time in the new school. Everything is novel and not clear, especially – the hierarchy of high school students. The young heroine suffers humiliation and attacks the older guys, because, in addition that she is the newcomer, so also she is an egghead. She it mocked, bullied and secretly recorded in outsiders. She manages to make friends with a girl named Martha, who are bullied also, because of her excess weight. After attempt to protect Martha, it gets worse for Veronica: the girl is given the nickname "Marta – dump truck". Sawyer realizes that it is completely useless to compete with the popular kids, and she uses her wit and skills to forge any handwriting to be taken into a popular group of three girls named Heathers (it means the name Heather in plural form): Chandler – tacit school queen; McNamara – captain of cheerleaders, and Duke – beautiful, but having bulimia. She ministers after them, and for that, they allow everyone else to believe that she also belongs to their group.

By order of Chandler, Veronica has to forge the signature of one of the school bullies Ram Sweeney, so on his behalf to write a love letter to her friend Martha, who in love with him since the elementary school. Thus, Veronica realizes that popularity is a double-edged sword, and there is nothing attractive in that fact, only lies, hypocrisy and dirt, poorly sheltered with sparkling veil. At the same time, there is a new student named Jason Dean, or, as he is called, JD. Father of Dean is an owner of a large construction company, and that is why the boy often dislocates. They are introduced with Veronica on the way home, when she is upset that she had to betray her friend and the guy just got hits from Ram and his friend Kurt Kelly.

Romantic relationship pretty quickly tied between them. Even despite the fact that Ram and Kurt threat to the guy due to sympathy to Sawyer. Veronica shares Jason with many things, tells him about the antics of the three Heathers and what she has to do for them. Once they get to the elite party, on which they have been dragged by Chandler, but there they quarrel with Veronica. Jason offers the fun over a stupid girl, and they interfere with milk and orange juice, but accidentally confused glasses and Chandler drinks a cocktail of household chemicals. The girl dies, and Veronica running on circles in a panic, not knowing what to do now, because this is the real murder. JD offers to forge handwriting of Chandler and to show the accident as a suicide, and Sawyer agrees. They come up with a suicide note in which "brainless doll" Chandler admits that in reality she did not survive the problems and hardships of this world, completely rethought own views on life and realized that she has no more place in this world.

And all would do, but a wave of gossips runs the school: it turns out that even the most popular girl can be deeply unhappy at heart, and none of them did even know. All students now recall Chandler only as a good and clever girl, which causes Sawyer and Dean to smirk. After the tragic event with Chandler, McNamara calls Sawyer for a meeting with Sweeney and Kelly, but it fails because the guys get drunk so much that she is forced to leave. In the morning, the school corridors resound news that Sawyer had a perverse sexual relationship with two guys at the same time.

Girl is furious, and Dean reveals her another plan: she has to invite the two bullies in the woods and, promising sex, force them to get naked, and the Jason shoot them with deafening charges, so after they could put everything as if guys were gays. Veronica agrees. Everything runs without a hitch. Forest, guys standing in front of her naked and grinning. A shot rang out and Ram falls. Following that, Veronica shoots Kurt, but then notices that the bullets were real, and her lover had deceived her. JD comforting his girlfriend, proving that nothing terrible has happened, because these two were the dregs of society and nothing good wouldn’t happen out of them. Then they furnish everything according to the plan, scattering photo from magazines with gays and putting them in ways so there were no doubts they had a homosexual relationship with one another. Veronica hastily wrote a note that explains that Ram and Kurt has always been in love with each other, but they could no longer live with this guilt.

During the funeral of the guys, the company to eliminate homophobia among young people starts, and the father of one of the guys recognized that in the youth, he had a homosexual relationship with men. Veronica realizes that they have gone too far, but Jason is delighted. He tries to convince Veronica that they make the world better in this way, but Sawyer is frightened by his sociopathic tendencies and reflects how to deal with it. A real boom is started in the school: suicides become mainstream, and almost everyone feels obliged to admit that has thoughts of suicide. Marta even stepping off the bridge on the highway, but the attempt fails, and a fat girl is in a wheelchair with multiple fractures. Veronica reveals that she did all the murders, but no one believes her, writing off the strange words on the nervous tension.

Soon the girl accidentally finds McNamara in the bathroom with a bottle of sleeping pills, in tears, and discourages her from almost occurred suicide. Then the girls become real friends. But Duke becomes a real bitch, repeating the path of Chandler. Jason offers to deal with her, but Sawyer refuses, insisting that there’ll be no more kills. A guy reveals that he is also great in forged handwriting, and the next suicide may be a suicide of Veronica Sawyer. That same night, Dean gets to the house of Veronica, but finds her hanging in a loop with a suicide note. He rejoices and says aloud a brilliant plan: he would make the whole school to sign a petition for the arrival of a rock band, to be able to forge their handwriting, and then the whole school would have committed suicide on the same day, from a bomb in the basement. He thought this plan was genius.

After Jason leaves, it appears that Sawyer lied to him and hanging was faked. Now she just had to stop a mad guy, not allowing him to kill so many people. She catches him on the next day in the basement, threatening with a gun & ordering to disable clockwork. After several bullet wound guy, he knocks the bomb off, but later she meets injured JD with explosives on a chest. He undermines the bomb.

Veronica, strewn with ashes, with blood on clothes, smokes a cigarette, crossing the veil of fog on the way back to school, where the crowd of students running out. Sawyer rips off red bow "queen of the school" from her ex-girlfriend Duke, cling it to own hair, and after she arrives to Martha's stroller, offering her to take a walk someday, because she had just gone through a difficult breakup with a guy.
Last Update:July, 05th 2020