I Love You, You're Perfect, Now Change Musical Lyrics 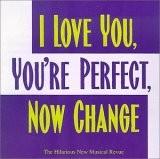 I Love You, You're Perfect, Now Change Lyrics

The first production was in 1996 and was closed only after 11 years, giving a fantastically successful 5003 hits. Probably three more ones were only in order to step over the figure of 5000 confidently, and not just to exceed it to 1 show or something.

J. Bishoff was the director, and the quartet of actors in the premiere was M. Weil, J. Leeds, J. Simard & R. Roznowski. Pre-Broadway runs were organized in New Jersey, in February 1995, by American Stage Company Theater. These shows involved the same team that later went to Broadway, with the exception of R. Michael, who was then replaced and added the fourth, so the team joined J. Leeds & J. Simard.

On the West End, musical has arrived for a short time, only for 3 months of 1999, with a set of actors: R. Wilcox, C. Carter, G. Kirkpatrick & S. Lindsay. In 2005, it was renewed, but only for 1 month, which subsequent stagings only in 2011 in Bridewell Theatre. In 2007, a version released in China, adapted not only for the Mandarin Chinese language, but also for the peculiarities of mentality. The English version of the play in China was in the same 2007. Besides this translation, musical can boast with another in such languages as: Turkish, Finnish, Czech, Korean, Hebrew, French, Catalan, Italian, Slovak, Spanish, Norwegian, German, Slovene, Dutch, Portuguese, Hungarian & Japanese. Among the cities, in which it traveled, those should be mentioned: Taipei, Buenos Aires, Los Angeles, London, Hong Kong, Guadalajara, Mexico City, Toronto, Berlin, Manila, Sydney, Milan, Tokyo, Boston, Bratislava, Budapest, Chicago, Johannesburg, Barcelona, Seoul, Dublin, Tel Aviv, Amsterdam, Rio de Janeiro, Shanghai, Istanbul, Prague & Beijing.