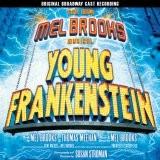 The play is based on the eponymous black comedy film of 1974, directed by Mel Brooks, who was also co-writer. The film was a parody of the famous horror movies of 1930-ies. Later M. Brooks admitted that it was his best picture ever made in career. After a successful musical show, filmed based on other film of Mr. Brooks, the author decided to create a show based on his favorite motion picture. Brooks attracted Thomas Meehan to write the script, with whom he worked on the previous show. On the establishment of production were spent around 20 million dollars. Broadway production received mixed reviews: some critics considered humor too low-brow and excessive, while others, on the contrary, liked the level. Not everyone appreciated the large volume and tiring for eyes visual effects of the production. Many viewers compared the piece with the film, as the show often repeated funny episodes from the original picture. Reviewers noted that the histrionics had some great songs, but they lost their luster because of the rest not too catchy tunes. Domestic tours were much more successful than Broadway production.

In 2015, Mel Brooks has decided to update the musical reworking its second act and adding new songs. He has decided to input changes due to possible future production of it on the West End. To create choreography, the author Susan Stroman was invited again. The new version of the show is under elaboration process at the time of writing this review – one year after the start of the work process, the information on the casting of actors is still absent.

Original Broadway production was nominated for several awards. Production was 8 times nominated for Drama Desk. The performance was presented in 10 categories on the Outer Critics Circle – it received an award as the best new Broadway musical. Also the show was once nominated for the Drama League, and three times – at Tony Award. In 2011, the show was nominated by San Fran Bay Area Theatre Critics Circle. Critics noticed that Andrea Martin and Christopher Fitzgerald, playing the helper and the hunchback servant, were able to show their comedic talents in all their glory. R. Bart and M. Mullally were less convincing as a young scientist and along with his New York’s bride, they were like imitating the heroes from the original film, not creating updated images of the characters. Reviewers noted that when curve of the plot moved away from the original motion picture, artists began to look more natural on the stage. The grotesque and specific humor features every creation of Mel Brooks. If the viewer accepts it, (s)he will get more pleasure from watching this musical parody.
Last Update:August, 05th 2016