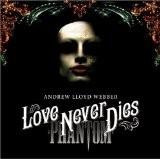 Many people may wonder about whether it was necessary to create a continuation of the famous musical. Is it possible to repeat or even surpass the now-classic masterpiece? Andrew Lloyd Webber has allowed fans of The Phantom of the Opera to meet again with their favorite characters. Composer planned continuation of the theatrical in 1990. But he really started it only 17 years later. The history of the unfortunate man, who was hiding in the caves of the Paris Opera, and his protégé Christina continued in New York. Love to the girl did not leave the heart of the mysterious Phantom. The man has reached wealth and success on a new place, but failed to find the happiness. He paid no attention to Meg, trying to win his heart.

Arrival of Christina and her family in New York revived hopes of Phantom for happiness. Attempt to make the young woman again to perform his works succeeded. But this has led to the tragedy – trying to win back the love, Phantom lost Christina forever. The beautiful music is playing at the time of the first meeting of the singer and her Maître. In it, we can already hear the approaching disaster. Andrew Lloyd Webber was able to convey the feelings of men and women who parted many years ago, but still love each other. It seems impossible to return to what it was before. Christina made her choice – she chose Raul. But wasn’t she wrong many years ago? Whether her current husband is worthy of love, which gives him a wife? Raul did not fight for Christina with the Phantom – he accepted the terms of the bet, and continued to follow them when she decided to perform on stage.

True love does not give up. It perfectly shows the mysterious Phantom. He has been waiting a new meeting with the beloved for ten years, and tried by all means to return her affection. Raul found himself not so firm in his feelings for Christina. His doubts about the reality of a woman's love to her own husband actually pushed her into the arms of Phantoms. Lost her support, Christina returned to her former beloved. The woman's heart continued to love Maitre, who helped to develop her musical talent. Therefore, she did not resist own feelings, realizing that Raul wasn’t that good as he seemed earlier. Phantom, waiting for years, looked much more worthy of her affection. She eventually realized that. But the fate was against their reunion. The death of a woman from the fatal shot ends mutual happiness.

The amazing performance of Ben Lewis & Anna O'Byrne, playing Phantom & Christina in Melbourne, allowed the viewer to immerse in the mysterious world. Their voices touched the hearts and caused a very emotional response from the audience. Opinions of critics separated, so it is best to see a musical and to make your own opinion about it. The only thing is for sure – Lloyd Webber's music is mesmerizing!
Last Update:April, 21st 2016