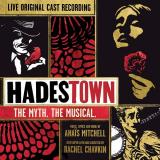 But even that hardest of hearts unhardened
Suddenly, when he saw her there
Persephone in her mother’s garden
Sun on her shoulders, wind in her hair

The smell of the flowers she held in her hand
And the pollen that fell from her fingertips
And suddenly Hades was only a man
With a taste of nectar upon his lips, singing:
La la la la la la la…

The more he has, the more he holds,
The greater the weight of the world on his shoulders
See how he labors beneath that load
Afraid to look up, and afraid to let go
And he keeps his head low, and he keeps his back bending
He grows so afraid that he'll lose what he owns
But what he doesn't know is that what he's defending
Is already gone