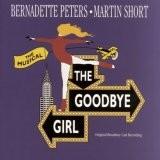 Sometimes a parting with darling brings so much pain that it becomes difficult to begin the new relations because you are afraid that everything can repeat. If you even find a new partner, you continue to look for any parallels with your previous love and see them. However, it is not correct to perceive new relations such way. People should try to turn them into the brightest and the warmest period in their life. The similar idea was included into a basis of the romantic comedy "The Goodbye Girl".

Watching the musical is a true pleasure because a viewer can seldom see the real talent, not an illusion of playing. The main actress acted a very ridiculous role of Paula, former dancer who has complex because of the age and painful parting with her groom all the time. Her scene partner has a role of the jobless comedy actor who is guided by his own philosophy of life, which cures Paula. At last, it is necessary to mention an unforgettable role of pretty girl Lucie. She is very wise and always understands the mother and helps her.

Scenic and light designs were modest. But it is quite clear, because the emphasis was placed on the meaning, not on the picture. It’s rather unusual occurrence for musical.

The director created a classical romantic comedy, in the form in which it should be. He probably tried to achieve the positive atmosphere, which wouldn't bore the viewers but would only attract their attention. The fact that the director showed the development of relations between the main characters, is especially pleasant. They aren’t constructed on hatred as it can be often seen. In spite of the fact that the musical has a pretty banal ending, the director has succeeded to represent it very beautifully.

The plot of the musical is very simple and can even seem quite ordinary. Nevertheless, it managed pretty good to reflect a problem of parting and its consequence. It should be noted that the musical is suitable for family viewing. The fact, that this show is intended for the wide audience, was clear: the hall was full on almost each performance. In total, this performance causes a sea of emotions, and its amazing songs will play in your head for a long period of time after.
Last Update:April, 06th 2016