Dance of the Vampires synopsis 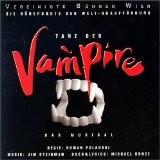 Dance of the Vampires synopsis

Professor Abronsius, a rather intensely wacky vampire killer,
with his ardent and Byronic assistant Alfred arrive in a village
where the locals protect themselves with massive amounts of Garlic.
Although the villagers deny any knowledge of vampires,
Professor becomes increasingly suspicious as Alfred becomes increasing smitten by Sarah,
the beautiful teenage daughter of the Innkeeper.

But Alfred isn't the only one after Sarah.
Visited during her bath,
she is soon entranced and mesmerized by the extremely cool Count Von Krolock.
The Count can give Sarah what she really craves - MORE!

Sarah has to choose between earthly love with Alfred, or eternal passion with Krolock.

Torn between Alfred and the Count, Sarah runs off to Krolock's castle, pursued by Alfred and Abronsius.

The Count sings to Sarah seductively - telling her about the upcoming Grand Ball where,
in exchange for a small bite, she can become Queen of the Vampires and rule the world.
How can any small-time girl resist?

There are ecstatic love duets, close encounters,
unbridled dancing & wild comedy all set to the Epic score of Jim Steinman.

The climactic vampire dance erupts as Reign of the Undead begins...
and everybody somehow manages to find happiness....Vampire-style.
Last Update:April, 06th 2016