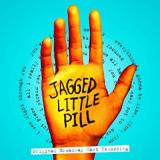 The Healys—Mary Jane, Steve, and their teenage son and daughter Nick and Frankie—appear to be a picture-perfect suburban family. Mary Jane Healy is a mom obsessed with keeping it all together despite the fact that her life is spinning out of control. She secretly harbors an addiction to prescription pain pills, and her marriage to Steve is distant and sexless. Her daughter, Frankie, who is adopted and the only black member of the family, feels alienated by the way her "colorblind" mother has diminished Frankie's black identity. She is also exploring her burgeoning queerness with her best friend with benefits, Jo. Mary Jane's son Nick is dealing with the pressure of being the golden child of the family—which is complicated when his best friend, Andrew is accused of raping Frankie's friend. When the Healys' lives are disrupted by a series of disturbing events, they must face harsh truths about themselves, their community, and the world around them.