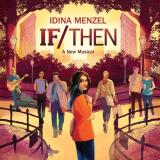 This is the Broadway musical created by M. Greif., B. Yorkey became the author of music. Preliminary shows began on Broadway in spring 2013 and lasted about two weeks. The official version was shown in 2014. I. Menzel (Elizabeth), LaChanze (Kate), J. Snyder (Josh), and A. Rapp (Lucas). T. S. Lawrence, J. Colella, J. Dixon & J. Tam were the substitute actors. In total, this histrionics had 401 performances.

The same year the musical made a soundtrack. It was recorded and released by studio "Masterworks Broadway". The album debuted on the 19th place in the Billboard 200 list. It is the highest chart position for Broadway records since the musical "Bohemia" in 1996.

For all the time of performing on Broadway (including a stage of pre-displays), the musical earned about 30.6 million dollars. The average percent of the hall fullness made 82.4%. The cash week record falls on the seventh week of displaying: the musical collected $1 104 188 for eight performances only. It was a financial success.

Next year American tour, which lasted 4 months, began. The musical has 13 nominations. It managed to receive only 6 of them, including Broadway.com Audience Award for song, musical, lead actress, love line, featured actor and actress.
Release date: 2014
Last Update:March, 28th 2016