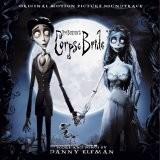 Johnny Depp voiced Victor and Helena Bonham Carter voiced Emily. Tim Burton was the director, writer, and developer of the characters, involving his company in the production. Rights for the distribution were sold to Warner Bros. Pictures. This musical collected USD 117 million in the worldwide box office.

This is a classic musical, not scenic, executed as a film. Its production was completed in 2005 (development was for two years). This is the first film in the genre of stop-motion, which has been directed by Tim Burton. Both previous were made by his colleague, Henry Selick. He has even a nomination for Oscar, but did not get the reward – that year another film won, on an interesting coincidence, also with the participation of Helena Bonham Carter, spouse of Tim Burton.

In parallel with Tim Burton’s work on the film Charlie and the Chocolate Factory (where Johnny Depp and Helena Bonham Carter also played), he develops this. It was assumed at first that movie to be shot with film technology, but then the concept has been changed to shooting with digital still cameras, at the last minute, everyone liked the idea & it was considered viable.

All work on the shooting took place in London and involved 12 animators and puppeteers. Their number has tripled by the end of production. To manipulate puppets with growth of 17 inches each, a special control technology was developed, as well as the three leading dolls were made with facial expressions, which complicated the work. Shooting was in 25 to 35 different filming pavilions, each had their own cameras and software that allowed uploading photos directly to one place to check the quality by line producers.

Each image was pre-tested and approved & then was filming, in a series of frames, because there was not possible to re-shoot due to time constraints.
Release date: 2005
Last Update:January, 19th 2016