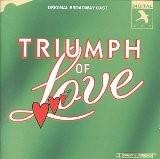 This spectacle took as the basis a comedy in three acts, written in 1732. The premiere of this histrionics was held in October 1997 in Broadway. It withstood more than 80 main shows and thirty preliminaries. Directed by M. Mayer, choreographed by D. Varone. The actors were: S. Egan, R. Bart, C. Sieber, K. Chamberlin, F. M. Abraham, N. Opel & B. Buckley. Due to creative discrepancies, E. Boosler, initially selected to perform the role of maid, has been replaced.

Company Jay Records produced the original record of the spectacular with all the music parts. A solo of Buckley ‘If I Cannot Love’ was added as an extra track to this record.

Critics have mentioned this play as wit and daring, able taking the very special place amongst the hottest contemporary productions. This theatrical has been nominated for a Tony Award for Best Actor, Best Costume Design & Best Lyrics.
Release date: 1997
Last Update:July, 18th 2016