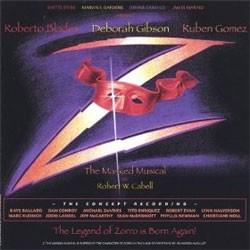 Musical is based on the novel ‘The Curse of Capistrano’, written by Johnston McCulley in 1919. Robert W. Cabell has made some changes to the original story, adding the Roma origin of the legendary hero. According to the author, only this could explain the desire of aristocrat to risk own life for the wellbeing of the plain people, as well as his sense of adventure. The play used the Spanish and Latin American folklore. Thanks to the rhythms of bossa nova, rumba, flamenco and tango, histrionics gets the appropriate music atmosphere. Pop ballads were also included in the show. Robert W. Cabell succeeded in his work, harmoniously combining such disparate genres. Many songs were performed by duets, trios and choruses – it expresses the concept of ‘ensemble-musical’, to which sought the creators of the staging. This performance was the sixth musical of authors. From 14 to 23 years, Robert W. Cabell was engaged in acting career. Then he decided to focus on the writer's career.

3 years after successful New York readings, Oregon hosted the world premiere of the theatrical. Battle scenes in the musical were performed by artists of the NY Fight Ensemble or N.Y.F.E. One of the troupe leaders played a role in the production, depicting Captain Ramirez. In the future, due to disputes over copyright with Zorro Productions, Inc., established in 2008 a rival show, Robert W. Cabell’s show disappeared from the scene. Only 13 years after its premiere, musical was seen again by the public – during a Bavarian festival, audience met it with standing ovation. German critics were very positive about this show. According to them, the play looked romantic and, at the same time, heroic. Light old-fashionism only added charm to the mysterious story about the defender of the oppressed population. The staging looked very picturesque in Clingenburg’s castle ruins, where the festival took place. Fights on swords, demonstrated on the stage, also looked harmoniously and naturally. According to spectators, musical lovers definitely have to watch this show at least once in their life.
Last Update:August, 15th 2016