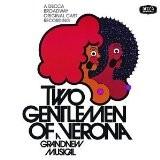 The action takes place in Verona, where two close friends Valentine and Proteus discuss their plans for the future. Valentine is going to go to Milan to know the delights of a privileged life in the court of the local duke, and to show himself to the secular society. He wants his friend went with him, but the latter cannot leave the city, because his beloved Julia lives there. Valentine leaves the city, accompanied by a servant.

Meanwhile Proteus betrothed with his beloved, but his father, not knowing about it, sends his son to Milan. Accompanied by a servant, a young man leaves his hometown to continue his education. Some time later Julia discovers she is expecting for a baby. A girl decides to go to Milan, previously disguised as a man to find her beloved. She was accompanied by a maid, who also worn men's clothes. Meanwhile, Valentine fell in love with the daughter of a duke Silvia, under whose shelter he lived. Silvia had to marry another young man, marriage with whom arranged her father. Young people fell in love at first sight and decided to flee the nearest night to be together.

Lover boy opens his secret to friend Proteus. But the latter, seeing beauty Silvia, understand what she is the love of his entire life. Tormented by remorse, he decides to tell the duke of escape. As a result, duke banishes Valentine outside the city, and locks his daughter in her room. Meanwhile, Julia came to the city along with her maid. By chance, she learns that the one, who promised to love her forever, has a passion for the other girl. Faced with Proteus, she does not reveal her identity. And as girls dressed in men's clothes, Proteus hires them both.

Silvia bitterly crying in her prison, begging her father to allow her to marry Valentine. Stern father rejects daughter’s begs, and calms down Thurio, whom she was promised in marriage: his daughter should soon forget all the nonsense and would agree to marry a guy. In the tavern, drinking a bit of ale, Proteus presents his new assistant, which is actually Julia, a ring that Silvia has to pass to another girl as a sign of his loyalty. This was exactly the ring that Julia gave him as a pledge of her love and loyalty back in Verona. But Silvia rejected courtship of the treacherous man and avoided his many gifts. At one night, she managed to escape into the woods. The duke immediately sent a squad to track down the rebellious daughter.

The robber attacks the escaped girl in the forest, but they are tracked by Proteus. Obsessed with passion, he rushes to kiss Silvia. But the sudden appearance of Valentine tames passionate temper of treacherous man. Valentine unmasks the cunning plan of his former friend. Proteus repents of his deeds, and receives forgiveness after renounces claims to the duke's daughter. Julia watching after this scene from afar, and she faints, seeing the whole picture. Proteus now finally learns that the young man was a girl, on which he had promised to marry. He apologizes to the girl, and she forgives him, because not ceased to love him even for a moment. Duke finally realizes that Valentine is the best choice of a husband for his daughter, and agrees to the marriage of young couple. Triumph of love takes place: Thurio falls in love with a friend of Julia, and the servants who accompanied the two young people from Verona, also find their mutual love.
Last Update:July, 18th 2016