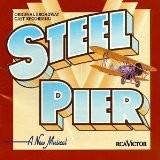 Stunt pilot Bill unsuccessfully performed at the air show in 1933 and crashed. Suddenly waking up and realizing that the heavens have extended his life for additional three weeks, the man decided to go to the dance marathon ‘Steel Pier’, for which he had already bought a lottery ticket. The winning coupon guaranteed him dance with the former celebrity. This woman was the one who kissed Lindbergh the first, when he returned to his homeland – the pilot flew alone from New York to Paris, for the first time in the history of the world. Her name was Rita and she received a piece of glory from the hero. Arriving to the ‘Steel Pier’, Bill saw the one with whom he was to dance. When he offered the woman to become his partner in the marathon, Rita refused pilot. She already had a partner, the appearance of which she was expecting at any moment.

After a while, the woman realized that she was left without a partner. Then she found Bill herself and offered to act as a pair. Soon a host Mr. Hamilton announced the beginning of the dance marathon. He was secretly married to Rita, but concealed it. According to the plan of Mick Hamilton, those pair will be awarded for victory, which included his wife. Then they would take away the money prize and went out of the city. Soon, a woman found out that the Bill did not know how to dance properly. But this did not prevent him from taking part in the competition. Each pair had to dance for 45 minutes and then rest for ¼ hour. If the participants would stop or fall, they would be disqualified. During the first break, all the contestants were presented. Bill told Rita that he crashed the plane, performing tricks in the air show, and showed a lottery ticket with her name.

Trying to attract as much viewers as possible, Mick Hamilton decided to simulate the wedding of his wife and the pilot. Rita went on such deception, with the condition if this would be the last marathon for her. Mick seemed to agree with his wife, but in fact, he was not going to end the show. Host demanded that the woman told about future wedding to pilot. Rita did not have time to explain the idea to her partner as the break was over. When Mick announced the engagement between the dancers, the audience was delighted. At the request of the host, for the pair has been prepared a special tent. During the fast dance, Rita dropped. Bill was able to stop the watch, and his partner was not disqualified.

Resting in a tent later, a woman realized that began to fall in love with the pilot. She invited him to run away from the marathon, but Bill admitted – three weeks of his life have come to an end. When the tent was torn away from campers, upset Rita fled. Her husband tried to get her back to the dance floor, but a woman refused to continue to participate in the marathon. When she decided to go home, Mick he said that their home has long ago been sold out. After the host began to scoff at the failure of the pilot in the air show, Rita saw the true nature of her husband. The woman realized that she doesn’t love her husband anymore, but didn’t know how to get out of the trap of failed marriage. Approached Bill encouraged his partner. The pilot said – he was given only three weeks to fulfill his wishes, while Rita had a whole life to start over. Tired woman packed her bags and left her husband. She realized that her fate depends only on herself.
Last Update:July, 13th 2016