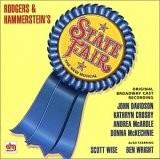 In the summer of 1946, Frake family gathered to go to the State Fair. Farmer Abel decided to re-submit to the competition his boar-winner. Neighbour Dave bet $5 that an award ribbon would go to other animal. At the same time, he has made additional bet that Frake family at the fair would get into any kind of trouble. The farmer's wife also took part in the competition – Melissa was certain that she would receive the first prize for her dish. Frake children went with their parents. A brother-sibling was upset that his girl decided not to ride with him. A sister-sibling wanted to leave their house quickly, not wanting to answer to wooer Harry, who asked her to marry. A girl replied she would take a decision after returning from the fair.

Frake family left. Arriving at the place, Wayne soon met a woman of glamorous look. The boy was totally struck. Father of Frakes began discussing with friends the pros of pigs. Reporter Pat came in the town with an assignment to describe this event. Seeing young Frake girl, reporter decided to conquer lass. In the meantime her brother learned that the glam puss – Emily – was the top-liner of the local theater show. Emily told the boy about a desire to become a leading Broadway actress. When a boy suggested actress to go out on a date with him, she agreed – his charm has made an impression on her. Emily warned the boy that the meeting would take place on her conditions.

In the morning, Abel offered to his family to spend family holidays on dancing. Soon began a competition for the best pickles & mincemeat. Melissa’s dish received a first place – together with blue ribbon, woman has been awarded with a special medal. Wayne & Emily watched the fair from a hill. When local theater began evening for waltz lovers, Abel & Melissa went to dance. Soon they were joined by joyful Wayne & Emily. Pat & Margy barely had time to kiss while dancing, when suddenly Harry appeared on the site. The next morning, was declared the winner amongst the wild boars & Abel Frake was awarded with a blue ribbon. Pat realized that his relationship with Margy were more serious than he anticipated before. After receiving an urgent message for an interview in Chicago, the reporter immediately boarded a train & went to the city. When Pat didn’t come out on a date, Margy thought he dumped her. Emily rejected Wayne after the boy confessed in love to her.

Abel Frake enjoyed the victory, but his wife has worried for the children – son started to drink & the daughter was very sad. Remembering his old friend, Wayne realized that it is better for him to forget Emily. When Harry came to Margy for an answer, the girl refused admirer – she realized that she did not love him. Soon Frake family went back home. A neighbor came to Abel & reminded him of the stake. He saw the sad Margy & concluded – definitely something happened with a girl at the fair. Suddenly a reporter came on the farm. Pat told his beloved about a trip to Chicago, where he was able to get a permanent job. A man offered Margy to go with him to the city. After that, the neighbor had to give Abel staked $5.
Last Update:July, 13th 2016