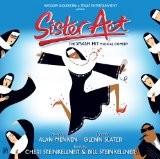 Deloris Van Cartier is not too lucky girl-singer who wanted to make certain changes in her life. She decided to start from the breakup with her boyfriend Shank, who is the owner of the casino & is a dangerous gangster at the same time. However, not having time to inform about her retreat, the main character becomes a witness to a terrible crime. Her boyfriend, together with his accomplices kills an unknown man, who, as they believe, informs the police about them. Frightened Deloris flees from the crime scene. Shank orders his boys to get her back. When she reaches the police station, she learns that the chief of the shift is her former classmate Eddie. She tells an old friend about the incident & he invites her to become a member of the witness protection program. According to Eddie, he will send Deloris where no one will ever be able to find her. It is a monastery called The Holy Order of the Little Sisters of Our Mother of Perpetual Faith.

The main character learns from the Mother Superior, that the nuns have limited contact with the outside world. In addition, women living in the monastery are forbidden to smoke, drink alcohol & wear inappropriate clothing. This frustrates Deloris, but she had no other choice but to partially obey these rules. During lunch, she meets with other nuns & exchanges a few pleasantries, in particular with overly perky Sister Mary Patrick. She learns how each of the sisters came to this place. When answering about her life story, Van Cartier answers with lie.

Situated in the nightclub Shark is enraged & orders his thugs in come what may to find & kill Deloris. He no longer puts conditions to get her back alive. At the same time, the main character, tired of the boring life inside the monastery, leaves it & went to the nearby bar. A few sisters secretly follow her. The nuns get a shock when they see how their new sister drinks, dances & openly flirts with men. They thought that she came to their place to instruct people on the right path & teach them to morality. Suddenly, a fight begins in the bar. Officer Eddie comes to the place, who greatly surprised to see Deloris here. He tells her friend that the Shark raised the reward for her head in several times & she needs to be much more careful. In turn, the Mother Superior ordered a girl to behave appropriately & in accordance with the Code of nuns.

The main heroine decides to visit a local choir’s rehearsal. She says aloud that the singing sounds terrible. Deloris teaches the assembled nuns a master class & they offer her to lead their choir. Former singer agrees & immediately is engaged to teach sisters professional singing. She even manages to reveal the entertainment talent of Sister Mary Robert, who has always been modest. On Sunday, the choir performs an anthem in a new manner. Much to the surprise of The Mother Superior, this performance brings to the monastery much more donations than ever before. Thus, Deloris was doing for a first time something really useful for society. However, rumors of this act reach Shank. The only thing the main character may rely at a meeting with a former boyfriend is at own wisdom & help of the faithful sisters. Recent are ready to make any sacrifice in order to protect the life of their new friend.
Last Update:July, 13th 2016