How to Succeed in Business Without Really Trying review 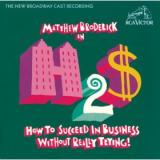 How to Succeed in Business Without Really Trying review

How to Succeed in Business Without Really Trying Review - Broadway musical

It's an amazing comedy musical! Here you can find magnificent acting, originally picked up suits, nice young actors and, eventually, unusual scenario. The plot line is quite simple: Finch is a young man of 27 years old, who has big desires and ambitions. He works as a window cleaner. Certainly, such state of affairs doesn't satisfy him. And once he finds a wonderful book, which and is called "How to succeed in business, without doing anything", appearing just in hands. Being inspired by it, he gets a job. Now he works in a big corporation as a clerk dealing with mail. All the plot develops quickly, but it is very correct and original. Finch meets Rosemarie, changes exactly two positions in two days — and in two weeks, he becomes almost a right hand of the boss. In the course of the musical, he falls in love, makes up his mind, tries to climb a career ladder in every possible way, and he is always lucky.

The musical is constructed on a subject, which is easy to guess according to the name, but all these things are shown without platitude, it is beautiful, like any Broadway performance. Everything in the performance makes us admire: original dances, suits, characters, simple comical songs and talent of actors.

This version of Broadway musical passes with minimum losses for scenic material. The producer, the director and the screenwriter, created something pleasant for perception, thoughtless and amusing and didn't lose the wit, which was the highlight of a Broadway version. Immersing a viewer into almost parallel world of corporate reality, which lives under the laws of everyday vanity, the director focuses all the attention on the main hero of the whole action – Finch. There is a separate word to tell about him. It’s a nice Broadway actor. Besides, it is one of his best roles. Quite short, only 168 cm, he plays the most important role, and almost all the characters in the musical are taller than him, including his beloved Rosemarie. But this is the highlight. Finch, by the way, has a lot of ones: charming charisma, the acute facial expression, which he uses the best of all, a fine voice, plasticity of movements – everything in him is rather enchanting, a viewer falls in love with him from the first minute. In general, the movie fills with positive energy, romanticism, admiration and pensiveness for a whole day and nothing can spoil this mood. It’s a worthy embodiment of the old musical and amusing book.
Last Update:April, 06th 2016