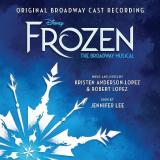 
BULDA:
What's the issue, dear? Why are you holding back from such a man?

TROLLS:
Is it the clumpy way he walks or the grumpy way he talks?
Or the pear-shaped, square-shaped weirdness of his feet?
And though we know he washes well-he always ends up sort of smelly
But you'll never meet a fellow who's as sensitive and sweet!

So he's a bit of a fixer-upper, so he's got a few flaws
Like his peculiar brain-dear, his thing with the reindeer
That's a little outside of nature's laws!

So he's a bit of a fixer-upper, but this we're certain of
You can fix this fixer-upper up with a little bit of love!

KRISTOFF:
Can we please just stop talking about this?
We've got a real, actual problem here

TROLLS:
Is it the way that he runs scared, or that he's socially impaired
Or that he only likes to tinkle in the woods — what?!
Are you holding back your fondness due to his unmanly blondness
Or the way he covers up that he's the honest goods

KRISTOFF: ENOUGH! She is engaged to someone else, okay?!

TROLL: Do you, Anna, take Kristoff to be your troll-fully wedded

TROLL: You're getting married!