Bring It On review 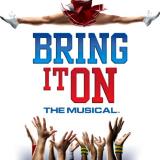 Bring It On review

Bring It On Review - Broadway musical

This musical is simple, cheerful and very buoyant, youthful and carefree bright. Internet has a number of different reviews of this musical, and they all use so abstruse words, that it seems that the reviews were written by some monstrous alloy of Kafka and philosopher-theorist in the fifth generation, whose usual pastime is to practice the syntax loquacious, where each word is replaced by its rare synonym. Who is interested in such? Only critic who writes this. From such too-smart reviews of cheerful and happy musical, it is wanted to say: "Okay, you’ve expressed your thought. And now let’s hear something on human language and rejoice the musical, not boring vocabulary linguist, which has been called to do a review of this musical due to some mistake. And anyway, you're of wrong century – is not fashionable now to know a lot of boring words".

There is much dynamism in the plot and a story. Everything revolves around the little twists and turns of life of few cheerleaders, the backbone of which is the sudden transferring of one of the main characters, Campbell, to another school, where there is even no cheerleading group (in different versions of musical, this group may be or may be not). In the course of the story, we learn that it is the machinations of one of the school officials, who did not like the main character was too friendly with her daughter. Actually, this same daughter was dating a guy whom Campbell liked. So, it is not a love affair of young students as the rot of the plot, but fight for the dream. After all, the whole point is that the main character very much wants to become the head of cheerleaders, to win the Nationals, but the audience wouldn’t have been interesting to watch her, how she does it through hard work and perseverance, gradually approaching the goal. The public never liked people's success stories, considering them boring, where the mainstream is a hard work and the ability to go right through everything to their goal, come what may. Do you know why? Because all the people in their overwhelming mass are lazy and mediocre and they crazily hate when someone is their complete opposite – hardworking person who achieves dreams. And this hatred is strong even from afar – everyone hates successful, envy them and vilify them. And imagine what would happen if they would have this goal-directed person in their team? Yes, all would proceed to get rid of him with a huge aspire, because he represents a colossal competition, which is easier to destroy physically than to fight it. Because the fight against purposeful person ends with losing, in any case. Therefore purposeful ones create their own companies and make millions, while others spit with bile, denigrating them – it's much easier than to improve themselves. Here are some of these feelings in question about the motives of the protagonist’s transfer to another school – the physical elimination, namely.

In the end everything, of course, turns happily, and the Good triumphs. In addition, the musical teaches us of ability to find a way out of different situations, of friendship and of team support. And also allows you to relax for two hours.
Last Update:April, 06th 2016