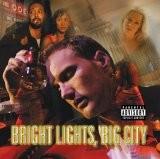 The musical tells a completely flat story of young man who comes to the big city from the province, but is unable to abstain from all those temptations that lurk here. Yielding to them, he destroys his life – work, relationships with friends, family and even causing a threat to his health, starting starve for a serious psychotropic substances, falling into the dependence.

Perhaps the creators of this musical wanted to show the young man as a kind of unrecognized genius writer who strayed from the true path and is mired in the abyss, instead of writing his first novel, which necessarily (though unknown why) must become a bestseller immediately after the release. But the audience – at least from our point of view, as spectators of this from the stage – thought he was a narcissistic egotist, who is full of self-pity, often engaged in soul-searching, and gives very little of time to what is really important – his goals. For example, he arrived in New York to write a novel. But it has left barely started – either his work prevents doing the book or the gatherings at the club. Do you know how many regular clubbers succeeded? The answer is too obvious. And do you know how many of them curses cruel world, who gave them no opportunities so they could succeed? All. Anyone who is not familiar with the concept of perseverance, commitment to goals and their achievements, despite the external circumstances – will always find themselves poor & miserable. Their lives will end after 15 years on the job like "assistant of clerk", where they are overgrown with beard and belly. Here, however, such a grim outline is not given, because closer to the end, our young man, antihero (because it is truly hard to call him a hero) acquires some clarity of mind and returns to his novel, overcame the narcotic intoxication.

The most striking parts of the musical in aesthetics and staging are moments when the characters portrayed in aimless existence in the club – they were all the time trying to seduce each other, to buy illegal substances, and to commit related ridiculous actions. The scenery with these is the most beautiful and soul-filled. The actors seemed to come alive when playing these numbers – perhaps the topic of clubbing is closer to them that anything else in the musical.
Last Update:April, 06th 2016