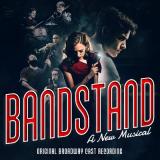 
DONNY:
That’s me, to a T.
You might as well have said,
“Hey Donny, come get your prize.”
I could write it in my sleep
The big trick is the delivery.
And the difference that I have is
I was there, made it through.
And now my number one priority
Is to put a band together that did too.
Every horn and clarinet will be a
Military vet, and be played with authority.

Donny Novitski, accordion genius,
Plays weddings at seven-years-old.
Then the piano, like fish take to water,
By nine it’s Fats Waller down cold.
Tunes of my own start to work themselves out,
I’m a twelve-year-old Irving Berlin.
All of that promise and none of the payoff,
I’m still playing weddings and taking my day off
And bumming around drinking gin.

They say greed rises but what if nobody tastes it?
In fact, greed rises and spoils, it’s gonna be wasted.

But Donny Novitski could beat Frank Sinatra,
If someone would give him a break.
In fact, I’d be better, cause I play piano
And he can’t read music, the fake.
Donny Novitski spent four years in battle,
And I carry the scars when I croon.
Frankie Sinatra skipped out on the army and
Half the time sings out of tune, he is so flat.

They say greed rises, but what if nobody knew it?
If that greed rises and rots, and somebody blew it.

Donny Novitski is finally looking
At one little crack in the door.
And get it to open and right there
Behind it, is everything I’m working for.
Picture Donny Novitski, the Polish-Italian,
Crooning his tunes, smoking his stogies.
Genuine vet of an army battalion,
Thin-tailored suits, if I cut out pierogis.

Bobby Sockers swoon at my charms,
Back up by my brothers-in-arms.
Donny Novitski knows this is a lifeline,
A once in a millennium shot.
And I’m gonna take it, take aim at my target,
And hit it with all that I got.
Donny Novitski has strong ammunition,
Plenty of talent, and burning ambition.
His songs are authentic as well,
From living through four years of hell.
Donny needs something to block out the memory
And break this insomnious spell.

They say greed rises, but what if nobody tastes it?
In fact, greed rises and spoils, it’s gonna be wasted.
So make it all worth it and give it a meaning,
Going from Cleveland to Hollywood screen.
Donny Novitski is gonna win first prize
Donny Novitski is ready to rise! Last Update: June, 24th 2017