Anyone Can Whistle synopsis 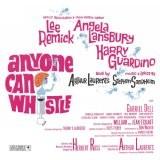 Anyone Can Whistle synopsis

Anyone Can Whistle Synopsis - Broadway musical

The story begins with mayor-woman thinks that all the citizens of her small town hate her (and this is not far from the truth), as there is no grass in the park, the townspeople came to the starvation state, the treasury is empty and water tanks are not filled with water (the action took place in arid areas). But here comes an unexpected miracle – the water starts to flow out of the stone and all begin to praise God, because surely tourists and immigrants must rush to them now.

The action becomes more crazy when from a local mental facility escapes a sick person (Cookie Jar – is the name of facility, obviously), which is mixed with the townspeople, and now it appears that it is quite difficult to differentiate him (or her) from the crowd, because many nerves are up-to-the-limit already. Therefore, no wonder that the local doctor says all those present that they are all sick and ties adviser of the mayor with the rope. The first act ends.

Indiscriminate (and rambling) presentation continues to grow and now for some reason, no one is busy looking for a person with mental disabilities, but a person named Hapgood suddenly meets a nurse of a local hospital, and she, as it turns out, does not know how to whistle, and learning of it is sheer torture for her. Advisor of the mayor sees the parade, which for some reason surreally passing in the city and regrets that she cannot take part in it.

People at the scene continue phantasmagoria meaninglessness – the doctor is fake; the girl is not able to whistle, upsetting about this; Dr. Detmold wants many cookies; someone meets someone, angry & forgiven, falls in love and it ends with curtain.
Last Update:April, 06th 2016