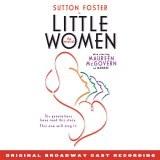 Little Women is the Broadway musical based on the eponymous semi-autobiographic novel of writer Louisa May Alcott, which is classic that was depicted even in Friends cult serial movie. It is considered a classic not only of American, but also of world literature. The script for the show has been developed by Allan Knee, songs & lyrics written by Mindy Dickstein. Musical accompaniment of the project belongs to Jason Howland, best known for his excellent work in the musical Blessing in Disguise in 2002.

Before Little Women went on a bigger stage, there were 55 preliminaries conducted. This confirmed that despite this classic is loved by many people, the great interest of the public to this production hasn’t been created and producers didn’t manage to gain enough money for the start of the long-term show. The first Broadway exhibit was on January 2005. As the place of the performance, Virginia Theatre was selected. The project lasted exactly three months and was closed on May of the same year. During this period, the audience saw it 137 times, which were directed by Susan H. Schulman. The team included choreographer M. Lichtefeld, decorator D. McLan, costume designer C. Zuber & lighting designer K. Posner.
Release date: 2005
Last Update:April, 21st 2016