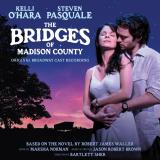 Bridges of Madison County, The Lyrics

On Broadway, it opened in early 2014 for the preview and the official start was given to it in February of the same year. It never had a big success; there were only 137 shows, which are quite enough for two seasons. Regular musical, which is set to entertain the audience in the middle-season, when there are no any other super productions. Recording of songs and music from it was performed in the same year, 2014, on CD.

After Broadway, musical went in the national tour, beginning in 2015, in November & it continued through Iowa, California, Texas, Las Vegas, Minnesota & Washington, with a scheduled completion in the mid of 2016.

The Philippines hosted the first international presentation of the musical, since November to December of 2015.
Release date: 2014
Last Update:December, 23rd 2015