Boys From Syracuse, The Musical Lyrics 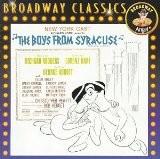 Boys From Syracuse, The Lyrics

G. Abbott was the director of the 1st show & G. Balanchine was responsible for the choreography. Jo Mielziner performed a scenery & light, and I. Sharaff was responsible for costumes. Alvin Theater hosted the play on Broadway in the 1938’s autumn. Pre-Broadway shows have been organized in Boston, New Haven & Connecticut. The show meat the success below average (at that time it was quite successful), with the number of display equal to 235. Actors were following: M. Westcott, E. Albert, M. Angelus, R. Graham, J. Savo & T. Hart.

It would be logical after generally normal success, bringing the show on the West End, to cover the two most prestigious part of the world in theatrical performances. Therefore, in the same 1963, Royal Theatre took the play with this set of actors: B. Monkhouse, D. Quilley, A. Deane, L. Kennington, M. Fitzgibbon, R. Corbett, P. Hendrix, E. Atienza, P. Turner, J. Adams & S. Farrar.

The musical was the basis for the movie, which was released in 1940. Production company was Universal Pictures, which that year was already 28 years old.

In Canada, the show opened in 1986 and stayed for 69 plays with such actors: S. Wright, E. McCormack, C. Feore, G. Semple, G. W. Davies. This show was recorded for the Canadian TV.

Another musical’s renewal occurred in 1991 in London, in the Open-Air Theatre of Regent's Park. Broadway also saw an updated show in 2002, where it lasted a total of just over 100 acts, counting with the pre-viewing. Actors were: L. Mitchell, J. Dokuchitz, E. Dilly, T. Hewitt, C. Zien & L. Wilkof. Rob Ashford was responsible for choreography.
Release date: 1963
Last Update:December, 23rd 2015