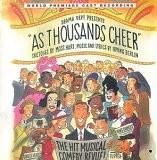 The musical is not only a legacy of music, but also a new opportunity. Thanks to it on stage for the last time, Marilyn Miller was able to shine. In addition, Broadway saw dark-skinned actress with white singers on the same rights and absolutely equal. It was a major step for the whole world.

The makers announced and advertised openly that they do not want to create another typical project. They wanted the musical to "explode" the world with the first line of a newspaper review. The composer even refused the customary fee, agreed to a more modest amount of money.

The musical was a startling discovery during the Depression. Since the first entrance, the play had a resounding success and gave rise to 400 more productions. One by one, the performances were shown on the stage. In 1935, London saw the premiere too, which also was a great success. Then came a performance under a different name, but the brightest star was Jose Limon. It was a shock and the possibility to shake things up for the hundreds of spectators.

Gradually, the musical has changed. In the Drama Department there were adopted some differences. The crew included such stars as Dorothy Stone, Paula Newsome and others. But the changes have not lowered the level of success. Everyone loved the musical. Everybody has supported the continuation and demanded for new performances. Not only America saw this miracle, but also outside the country, representations were shown to please the audience.
Release date: 1933
Last Update:December, 02nd 2015