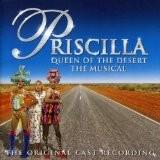 Priscilla: Queen of the Desert Lyrics

This show is great work made by Australian directors S. Elliott and A. Scott. It is an adaptation of the movie of 1994, directed by them. Debut of the spectacle happened in Sydney at Lyric Theatre in the year 2006. It received outstanding reviews and got success. After this, the staging took place in other big cities of Australia. In 2008, it came to New Zealand. Such success made the directors create West End and Broadway productions. The original version was nominated for 7 Helpmann Award and got one of them. There were also nominations for Olivier & Tony Awards. As for the latest, this musical received one for the Design of Costumes.

West End version took place in 2009 at Palace Theatre. S. Phillips became a director, S. Murphy was responsible for music, T. Chappel & L. Gardiner made costumes & R. Coleman was a choreographer. The design of staging was created by B. Thomson. The leading roles were played by J. Donovan, T. Sheldon & O. Thornton. The performances continued for two years. As for the Broadway version, it appeared in 2011. The debut happened at Princess of Wales Theatre. Among the cast, there were such actors, as W. Swenson, T. Sheldon & N. Adams. R. Coleman became a choreographer again, while B. Thomson created a set design. The costume designers were also the same as for West End spectacle. There were 526 displays and more than 20 previews in total.

Besides the English speaking countries, it has become popular in Europe and South America. The productions were created in Italy and Brazil. The show deserved a national tour in the United States, which started in 2012.
Release date: 2009
Last Update:July, 06th 2016